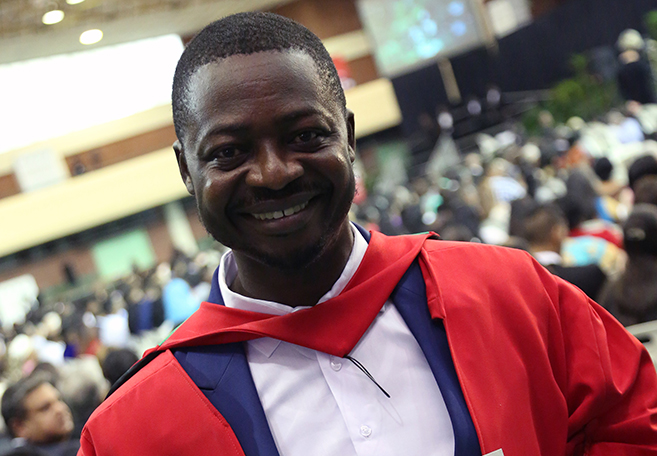 Kutu’s awards include being named among the Top 10 student researchers at UKZN for 2016 indicating he has performed consistently with his research papers published over the past few years in journals recognised and accredited by the Department of Higher Education and Training (DHET).

He has also published eight articles from his PhD thesis; received the 2016 UKZN Doctoral Research Scholarship which is awarded to one doctoral candidate in each College who is in the top five percent in the categories of intellectual strength, research aptitude and purposefulness as motivated by evidence, and also graduated with his Masters of Commerce Degree with distinction in 2013.

‘Though studying is challenging, I was fortunate that because of my status as a top student my tuition fees, cost of living and attendance at local and international conferences were funded by the University and the College of Law and Management Studies,’ said Kutu. ‘My family’s educational drive keeps me going and I am happy I am following in the steps of my brother Professor Funso Kutu who is a Soil Scientist at North-West University.’

‘The study is of strategic importance in helping boost the growth of the industrial sector and employment. It sheds light on divergent views on the process through which monetary policy affects industrial output in BRICS countries. My research established that area-wide monetary policy affects industrial output in recessions and expansions and that the BRICS countries have similar business cycles.

This is the first investigation to use a Panel Structural Vector Autoregressive model (P-SVAR) to study a bloc of countries worldwide and also the first to examine monetary policy shocks and industrial production in BRICS countries,’ explained Kutu.

With his goal to becoming a professional economist, Kutu is first cementing his academic career by working as a researcher at the Health Economics and HIV and AIDS Research Division (HEARD) and being a convener for the School of Accounting, Economics and Finance Macroeconomics Research Working Group (MWG).

‘I have a lot of responsibilities especially with teaching, assisting fellow researchers and student consultations. The PhD will enhance my critical thinking, complex problem solving, and correct decision-making in my working place as  I have the ambition to challenge and push myself to new heights,’ he added.

© University of KwaZulu-Natal: All Rights Reserved